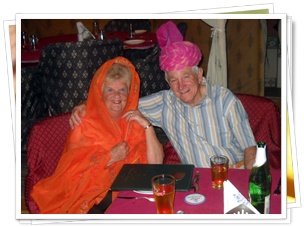 Thank you for the photos. We would like to thank you for organising a wonderful tour for us. The extra attention and service you gave us was fantastic

Your choice of hotels was excellent. We liked them all.

We had a lovely room at Udiapur with a view of the lake, a romantic hotel at Jodhpur, the Paradys Hotel in the fort was a little rustic but its position was great, a magnificent hotel at Ochra, the Radeson was a surprise and Cynthia enjoyed the pool, the rooms in Sikkim were enormous, etc.

I had read on the Internet about the bad drivers in India, but after traveling with your drivers, I am of the opinion that they must be the best in the world. I know of no South African who could cope with your driving conditions. Some of the road surfaces were dreadful, but India seems to be slowly rectifying this. In about five years, they should have a good main road system.

We were surprised because the layout was different to South African trains. Here we have a passage with one row of compartments, each with wooden doors.

We thought that we were getting a two-berth compartment. Cynthia was so upset that she tried to upgrade to first class, but was told that there was no first class. The bottom-bunk holder swopped with Cynthia. So she could sleep on the lower bunk. I just climbed to my top bunk and went to sleep, but Cynthia had a restless night.Second-class overnight is not a good option for some elderly female travelers.

We liked the camel ride and sunset, the elephant ride, and watching the sunrise at Darjeeling. We were amazed to see the turnout for the sunrise. It seemed as if the whole town was there. Prices for eats and refreshments were different at your hotels compared with higher-class tourist hotels. At our hotel in Udiapur we were paying about 100 Rupees for a Kingfisher beer; we went to eat at a tourist hotel restaurant and paid 360 Rupees for the same beer.

Please let us know if there is any help you require in promoting your tourist business. We have just finished organising a concert, and have another coming up in 12 days, with a party for about 500 elderly people. We are quite busy until 2 December, after that it is quieter.