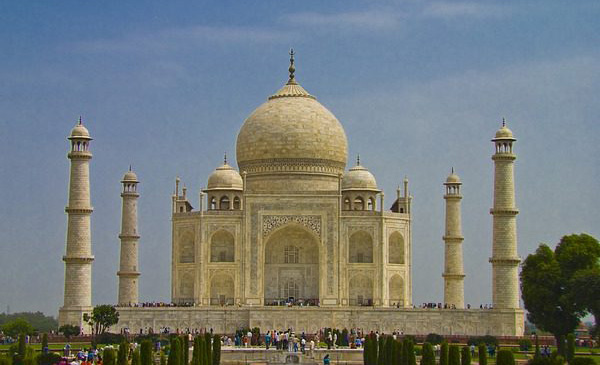 Welcome to India, You will be received by Premium India Tours representative at international airport and assisted to your hotel. In the Hotel you will have a brief description of your tour and the representative will hand over your documents regarding the tour, Overnight in Hotel.

After breakfast takes a sight seeing tour of Bombay, drive to Gateway of India and from here cruise by motorboats to Elephanta Caves. A flight of 100 steps takes you to the top of the hill where it is set. The caves houses large pillars that seem to hold the ceiling which is made of cross beams. The picturesque presentations of the 9 marvelous sculptured panels, set on the walls are awe-inspiring. The most famous of the panels is the Trimurthi, or triple-headed Shiva, where the God is depicted as the destroyer, the preserver and the creator. Later in the afternoon cruise back to Gateway of India, one can have lunch at the Taj Hotel or other several good Restaurants like Leopold & Mondegar serving continental cuisines. Later visit Prince of Wales Museum, Parliament House, Marine Drive, Jain Temple, Hanging Gardens, Return back to the hotel for overnight

Morning at leisure, in time transfer to Domestic Airport flight to Udaipur. On arrival you will be received by your driver and transfer to hotel at Udaipur. Later visit Udaipur. One of the most romantic cities in Rajasthan, Udaipur is also known as the city of lakes. The marble palaces, beautifully laid out gardens and the lakes make Udaipur seem almost like a mirage in the desert. The founder of Udaipur, Maharana Udai Singh, was overcome by the misfortunes that his old capital of Chittaurgarh had to face due to repeated attacks by the Mughal armies. On the advice of a holy man, Udai Singh shifted his capital to the banks of Lake Pichola- the city was named Udaipur after him. Afternoon Boat ride at Lake Pichola and visit "Jag Mandir". Evening time free at leisure. Overnight in stay at Udaipur.

Breakfast at Hotel . Morning visit the City Palace, Jagdish Temple, drive around Sahelion ki Bari (queen's resort for her friends), Fateh sagar Lake. We will try to organized your Lunch at " Lake Palace " ( because that's the only way to visit inside the Lake palace) Afternoon /Evening free at leisure. Overnight stay at Udaipur.

Breakfast at hotel, later drive to Pushkar. On arrival, check in your schedule hotel. Pushkar - Amongst the grandeur of Rajasthan, discover a unique gem - Pushkar. Lord Brahma - The creator of the world in a search for his abode on earth, performed the supremely spiritual VEDIC YAGNA at Pushkar. It is thus the site of the only Brahma Temple in the world. Blessed with cultural blends, it is the venue for the famous Pushkar Fair, with people coming from all over Asia to buy and sell cattle of breeds from across the world. The consecrated mausoleum of Khawaja Moinuddin Chisti at Ajmer attracts pilgrims from all over the world. A city of Pilgrimage from time immemorial with over 500 temples and Ghats Pushkar begets a legacy of timeless architectural heritage. Pushkar radiates an ambiance of peace and spirituality that casts a lure to visit again and again. The Pushkar fair is amongst the largest cattle fairs in the world and amongst the oldest cities in India, with references in mythology and the Mahabharat. There are 52 bathing Ghats, which are linked to the lunar calendar, enclose the lake. Each Ghat has its own miraculous qualities and powers of healing and this city of temples has over 500 temples built over different eras with varied architectural styles. The rose garden of Rajasthan - the essence of the famous Pushkar rose is exported the world over. Pushkar has the most varied terrain in Rajasthan with sand, rock, hills, and proximity to a number of heritage properties in the area and a number of fairs and festivals - especially on the new and full moon days. Overnight stay at Pushkar

Morning at leisure, visit Pushkar city for few hours and later drive to Jaipur the Capital city of Rajasthan. JAIPUR - The origins of the beautiful city of Jaipur can be traced back to the eighteenth century, during the reign of Jai Singh II who ascended the Amber throne in 1699. Jaipur today, epitomizes the spirit of Rajputana. In-spite of growing into a bustling metropolis, it still retains it's character and history - A beautiful fusion of the yesteryears and modernity. Popularly known as the Pink City because of the extensive use of the locally abundant pink plastered stone, painted so in honor of the visit of the royal consort of Queen Victoria. Jaipur thrills the soul with its massive forts, magnificent palaces, exquisite temples and lush gardens. Rest of the time at leisure. Overnight at Hotel.

Breakfast at hotel. Proceed for excursion to Amber Fort in the outskirts of Jaipur. Elephant ride ascent to the fort. From Amber Fort drive back to city and visit Wind Palace (Hawa Mahal), City Palace, Jantar Mantar. Later in the afternoon you can visit Textile & Jewelers showroom. Later in the evening enjoy walking city tour. Overnight stay at Jaipur

Breakfast at Hotel, drive to Jaipur en-route visiting "Fatehpur Sikri"abandoned Mughal city of built by Emperor Akbar in 1569, was the old capital of the Moghuls, which was abandoned after 15 years due to scarcity of water. See the graceful buildings including the Jama Masjid, Tomb of Salim Chisti, Panch Mahal & other Palaces which are still preserved in its original glory. On arrival at Agra check in your schedule hotel and later visit Agra fort, Taj Mahal from river side. Overnight stay at Agra.

Khajuraho: - The temple city of central India is famous throughout the world for its exquisitely carved temples in stones. Thousands of visitors and tourists from all over the world flock together to envisage this immortal saga of Hindu art and culture engraved in stone by shilpies (stone craftsmen) a millennium ago.

Breakfast at hotel; visit Khajuraho temples till after noon, Return back to hotel for lunch. In time your will be transfer to Khajuraho Airport for your schedule flight to Varanasi. On arrival at Varanasi, you will be received by our representative and transfer to hotel. Later in the evening visit the Ganga river Ghat to see" Arti " Puja. Overnight stay at hotel.

Morning boat ride tour at river Gangas, return to hotel for breakfast. Later on Proceed for full day sight seeing and overnight stay at Varanasi. Varanasi is an important and sacred pilgrimage center for Hindus and a major tourist attraction. It is situated on the banks of river Ganga. The word Varanasi has been derived from an ancient name meaning the city between two rivers - the Varuna and Asi, which flow in the north and south of the city. Varanasi is also known as Kashi and Benares.

Varanasi, one of the ancient seats oflearning in India, is a center of learning even to this date. Glorified bymyth and legend and sanctified by religion, it has always attracted a large number of pilgrims and worshippers from times immemorial.

Ghats: Pilgrims gather at the Ghats to have a ritual bath and worship the rising sun. The most famous ghat is the Dasashvamedh Ghat, others being Asi, Panchganga, Barnasangam and Manikarnika, Ghats.

Sarnath: 12 km from Varanasi lies Sarnath, where Lord Buddha preached his first sermon and revealed the eight fold path that leads to the attainment of inner peace,and elightenment. Vishwanath Temple: This is one of the most sacred temples in Varanasi and is dedicated to Lord Shiva. The temple has skillfully been restored as the actual temple was destroyed by Mughuls.

Breakfast at hotel; visit Khajuraho temples till after noon, Return back to hotel for lunch. In time your will be transfer to Khajuraho Airport for your schedule flight to Varanasi. On arrival at Varanasi, you will be received by our representative and transfer to hotel. Later in the evening visit the Ganga river Ghat to see" Arti " Puja. Overnight stay at hotel.